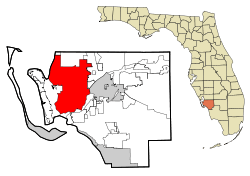 Cape Coral is a city located in Lee County, Southwest Florida, United States. The city is on the Caloosahatchee river that flows into the Gulf of Mexico. Cape Coral was founded in 1957 by the Rosen Brothers and developed as a planned community. The city’s population estimate is approximately 179,804 in 2016 and has an area of 120 square miles, Cape Coral is the largest city between Tampa and Miami. Cape Coral is known as a “Waterfront Wonderland”, mostly because of its almost 400 miles of navigable waterways, 140 miles of which are salt water access to the Gulf of Mexico. Cape Coral has more miles of canals than any other city in the world and is a boater’s paradise. Below are resources for the city.